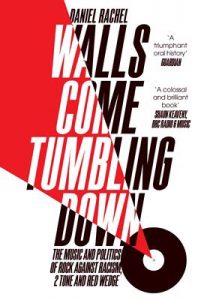 Daniel Rachel author of Walls Come Tumbling Down – The Music and Politics of Rock Against Racism visited The Fiery Bird Show on Thursday 25 May to give insights into writing the book, the story of the Rock Against Racism, 2 Tone and Red Wedge movements and the legacy they have brought, not just to the cultural and musical fabric of the country but also it’s social construct; that activism can be tranquil, gentle, and still effective,that the movement was to build positively, not just fight, bringing us to the release of Nelson Mandela.

The book, that gathers the stories from all the protagonists who were there, serves as an oral history of an important movement – it documents how the movement was started initially crystallised by a performance rant of Eric Clapton in Birmingham gathering to a country wide swell of support turning Brittania into Cable Street and bringing together so many different groups and individuals to promote equality of race, sexuality and gender. Even in this digital age the efforts and resolve of making things like this happen which would be monumental today with our access to a networked life cannot be underestimated; the belief and strength of people coming together cannot be dismissed. That it could happen in a way as slaves of mainstream messages, memes and soundbites we perhaps can’t conceive actually can give us heart; because the book also documents the barriers, the mistakes and the shambolic way things also happened. Perhaps we live in different age where now it can be so fashionable to stand back, arms folded waiting to see if something will succeed before we commit to it because after all we can always click on an event and pretend to go and socially agree with each other online but then? People dived in who believed in something and still with the legacy that saw off Moseley in the 1930’s, diverse groups of people put aside differences to combat a common rise of division, fear, marginalisation being used to set people against each other by groups with a divisive agenda such as the National Front. This at least serves, if not just for the interested in a period of time, or style of music or type of political stance. The names that seem iconic now, were new bands and performers then, with the same egos and the same squabbles and irritations. Take note you established artists who bemoan the lack of contemporary protest singers and songs, they are there, they may not be big as you weren’t either then, and yet, with all the platforms available they are still not known by even the like minded – perhaps inside our own houses there is tidying to be done, mirrors can always do with polishing. A repetitive historical lesson that those who ended up on the right side of history were not necessarily on the right side of acceptance of their peers as well.

This also is an inspiring read for those who want to see change in something, whatever that might be, that it is far more important and always possible to make something happen, and the only failure is to never try.

You can catch up on the show again here