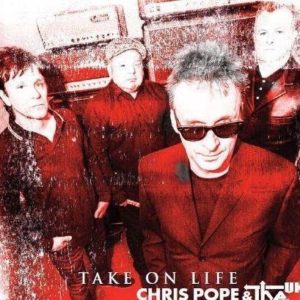 Thursday 18th May brought Chris Pope of The Chords UK into the Fiery Bird Show at Radio Woking. A band often credited with being the ‘one that got away’ as the swell of modernism rose and waned in the late seventies post punk era, The Chords were renowned for their lyrical observations in our ordinary lives with the emphasis on how we change. In the great tradition of songs of protest with a humanity of everyday reality there was perhaps rather more to them than some who prefer their music to be entertainment that fitted easily into a made to measure groove were comfortable with getting to grips with. Fitting well with this observational challenging tone it always felt they weren’t given the due acknowledgement for their work despite constant, popular and critical acclaim for songs like Maybe Tomorrow which Chris says was written about fighting the fascists in the early days, a time when Rock Against Racism and other movements were stirring against the rise of the National Front and their like. Serendipity plays tricks with destiny and though understandable as it would be, the disillusionment with connecting to like minded management hasn’t stemmed the tide of work from Chris Pope nor has it dampened the fire of the songs he writes with the new album Take On Life recently released from a successful pledge campaign. Chris brought in songs and stories from the start of the Chords to now and it will be exciting to see where this new material and gigs take them this year because recent gigs have been energy filled, raw and exciting with the whole line up not bathing in nostalgia but having something that adds another layer to this contemporary culture and what it has to say about the times we are living in

You can listen again to the show here – it starts 5 minutes in because some eejit didn’t turn the desk on (me) just so you know that first five minutes were the finest broadcasting five minutes  ever……by me …. so, on balance it was just the guest that was great, lovely guest and fine musical company – more power to his elbow!

https://www.mixcloud.com/radiowoking/fiery-bird-show-with-chris-pope-from-the-chords/
Playlist
1. Maybe Tomorrow – The Chords
2. I Can’t Explain The Who
3. Ghosts of Cable Street – The Men They Couldn’t Hang
4. British Way of Life – The Chords
5. Man On The Northern Line- The Chords UK
6. Heart of The Matter – The Chords UK
7. Making Time – The Creation
8. Bank Failures – Bob Miller
9. Don’t Forget Who You Are – Miles Kane
10. Meant To Be – Chris Pope
11. All Men Are Liars – Nick Lowe
12. One Man Band – Roger Daltry
13. Werewolves of London – Warren Zevon
14 Between The Wars – Billy Bragg
15. Set The House Ablaze – The Jam
16. Pillars of Society – The Chords UK
17. Free World – Kirsty MacColl
18. I’m Going To Run Away From You – Tammy Lynn
19. Take On Life – The Chords UK