It a pleasure to be joined in the studio by Danny Buckler, Woking boy, comic genius, and a very amazing Magician.

I had the pleasure of seeing Danny a while back at ‘Joke in The Box’ at The Lightbox…….and I have never laughed so much in my life! Laugh out loud comedy, and all the while, he is also performing Magic?!  This guy is Awesome.

Tonight we’ll be learning more about Danny, his time growing up in Woking, how he started on his journey into comedy and magic and much more. He also has 2 shows coming up this year’s Guildford Fringe Festival, and we’ll be talking more on that too. I would highly recommend them. In between all that, we even have some song choices  from Danny that we’ll be playing. 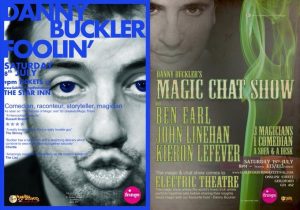 In the second hour, more local chat, with lots of local events & happenings from around the area, a few shout outs and lots more music. Jackie has been called away by the Spanish Government to check that the temperatures in their resort’s aren’t too dangerous for sunbathing – but luckily I’m joined by Tim Buckler who will be co piloting while he learns tonight.

For DAB search Radio Woking. To listem on your mobiles or tablets, you can download the free Radio Woking app, available for all makes. 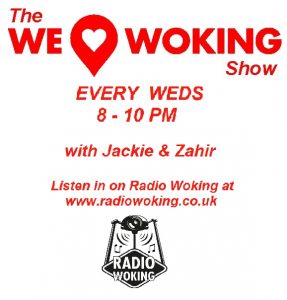