Here is what they have to say……

Well this is going to be interesting Radio Woking (one of our media partners) have given us our own show for one week which shall be repeated several times up to Undercover… what have they done did they not learn their lesson from the bedlam of last years shows. .

PRESENTED BY MICK M FROM UNDERCOVER FESTIVAL – Ably assisted by “LOCAL LEGEND” MURPH one of the Radio Woking stalwarts, the Friday show with his cohort Mabbs who are both an integral part of Undercover Festival as well. . . . .

Spinning tunes by many of the bands playing Undercover Festival and a few from the past as well – pus a few dodgy favourites of Mick. . . .

We were offered more shows but we don’t have the time to do more – sorry. . .

What is in store for Radio Woking and the fair people of the area in store – we shall see….

SO WHO ARE NO LIP?
In their own words
Right, lets get this straight. We are playing no frills, straight up honest as you like punk rock. We don’t bother with our own stuff it just clouds the issue, the issue being bringing these tunes back to an appreciative audience and not trying to promote our own half assed take on current affairs, we leave that to the “Facefuk” generation.why not come along to this show and hear full on, heart felt renditions of PuNk RoCk classics and rarities plus tunes to groove to before+after the blistering live set.So tell everyone you know, whether you like them or not and get down to the clash city rockers that are”NO LIP”

The Playlist will be published below some time soon… 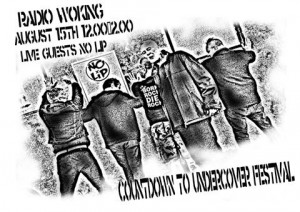