Fiery Bird Show with Will Purdue & Liza Bec – listen again here
Thursday 27 April I was joined by Will Purdue and Liza Bec to talk about their music, film and writing projects, bring in their choices of music and play some songs live in the studio.

Here is some background information about them 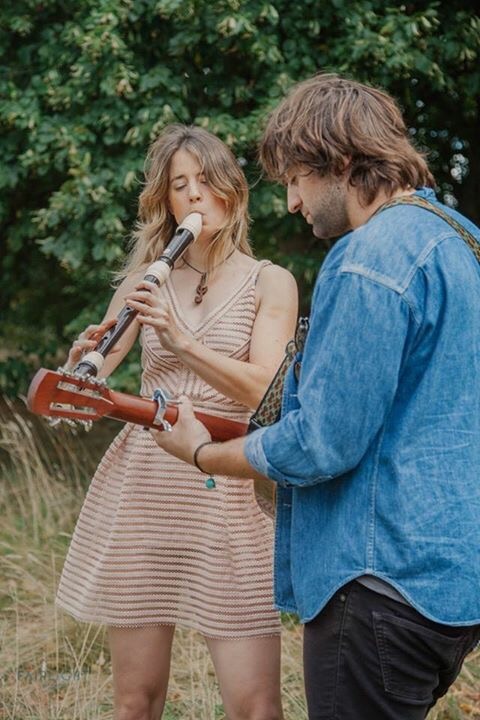 “Will Purdue, the introspective and emotional singer-songwriter and Liza Bec, the alternative multi-instrumentalist, continue their collaboration, showcasing their evolving and exciting new material from their latest releases.
Will’s soulful rasping baritone and Liza’s gorgeously theatrical soprano combine in a truly unique combination of sultry harmonies, with Liza adding both recorder and saxophone to Will’s skilful and sensitive guitar. Together they create a very classic and rarely heard sound, fusing elements of folk storytelling with alternative rock.
The pair have also exploring creativity in the visual side of their work, with Liza re- leasing a captivating and risqué video for her EP’s title track, Out Of Control. Will is currently recording a double EP which is split between folk and country. This will form the soundtrack to a thought provoking short film addressing LGBT parenthood issues.
2016 saw a UK tour with dates including performances at Celtic Connections, Lon- don Blues Festival and Kaya. They have also ventured abroad to Sweden and Denmark, as well as Liza performing with James Holden in Belgium and Italy, with the highlight being Turin Jazz Festival.”

BUT WHAT ABOUT WHAT WE KNOW OF THESE PEOPLE, THE LION AND THE SIREN AND THE SONGS OF THE VICES SUNG BY THE VIRTUOUS?

I first met Will a few years ago when he played with a band we booked for one of our music nights, he came in with a fine head full of hair like a friendly lion and left us a kind present of his excellent and valued guitar, well, forgot it actually. Conscience pricked we shut down the eBay tab and made sure we got the guitar back to him via his estimable band mate of the time Maria Brashier now also successfully around and about the music scene in other projects. Small world really the music scene, nice to see people collaborating and then moving on to other projects but still keeping an eye out for each other and supporting each other, anyway I digress but it is nice.

Since our first meeting, Will has played for us in various settings the last at the small acoustic venue where he arrived dressed as an elf. He maintains it was relevant and at Christmas time, I am not sure but who am I to upset the talent? Also as a qualified personal trainer we were able to comfortably reassure the audience that should they be requested to touch their toes they were in capable hands. Then we checked out public liability insurance just to be on the safe side.
Food festival time and we meet Liza we get two for the price of one! They did two sets for us in different locations and had the town talking – both excellent musicians with a diverse range when put together blimey o Reilly!!!
Since then I have had the pleasure of playing Liza’s debut solo song ‘Out of Control’ that displays her massive vocal range – voice of an angel that veers into Patti Smith sharpness, not only the words hinting at chaos beyond but vocally and musically taking the listener to the edge and then soaring into beauty.
So here we are listening to both of them, finding out more about their stuff and their future plans and nothing gives me greater pleasure than meeting people who are experimenting with their creativity and making music with integrity, working hard to make things happen in the right way. The point made about how, on bringing that work to music industry professionals and told an album is too diverse in genre was disheartening, no matter how understandable that it is hard to market something that cannot be pigeonholed. Conversely it is always those who work with belief at what can appear to be a difficult landscape for their music, not playing to trend or diluting their intention, that history elevates above their peers. I have been lucky to meet so many of these new writers and musicians who, whilst frustrated now, are keeping the faith with their work and I fully expect that they too will be on platforms far wider than genre or fashion will ever confine.
Check out links to Will & Liza’s projects here

PLAYLIST
1.Fight For Your Right To Party – Beastie Boys

2.Me & My Gin – Bessie Smith – dedicated to the lovely Emily, my God-daughter whose birthday it is – I believe she likes a sip of gin or two (she’s a grown woman before you all reach for the childline number)

4. Darkest Hour – Anybody There

Back to the CD drawer

17. Lady Is A Tramp – Ella Fitzgerald
The Fiery Bird show is on Radio Woking every Thursday night 8-10pm. It features guests from varying backgrounds, professions and creative pursuits who have either tickled my fancy personally or their work has and who are happy to come or phone in and have the whole show fitted around their theme. It is a relaxed affair so that people can really talk about not just a current project on promotion but also what it is that fires them up to make these things happen, a conversation, rather than interview, based around research and genuine interest in them and celebrating their work. So far we have been lucky to have such a variety of guests at different stages in their projects, ultimately no matter how far up the ladder people are or at the start, the one recurring theme is that they are people who do what they do with conviction and believe in it and to be honest that is the only theme I can think of that drives the radio show.