Shots fans were back in force at the EBB Stadium on Tuesday night as Gary Waddock made his second competitive home debut, on his return to Aldershot Town, with the visit of newly promoted Maidstone United.

It was a special occasion as the host’s started the gam on the front foot. With three chances in the first five minutes, first it was new striker Matt McClure who was played in down the right side of the 6-yard box. His snapshot across goal was parried away by keeper Lee Worgan.

Then it was time for 15/16 player of the season, Jake Gallagher to play in McClure again, this time to the left of the box. Worgan however, raced out to clear the ball, but straight to fellow new signing Iffy Allen whose shot was cleared calmly for a corner. The resulting set-piece saw Jack Saville head just wide.

Shamir Fenelon, a recent arrival from Crawley Town, then had another curling effort from just outside the box parried. Jake Gallagher putting the rebound over the bar.

As the game approached the ten minute mark, back came the all too familiar cheer of ‘Gary, give us a wave’ from the home support. The man himself responded enigmatically, to further chants of ‘Ginger Mourinho’. The support, seemingly higher for the returning gaffer, than any manager since his departure.

In the 22nd minute, a minutes applause was observed in memory of former Shots fan Steve ‘Chappie’ Chapman who passed away from post traumatic stress disorder in 2011. The minute 22 came from Commercial manager Mark Butler who is taking part in the ’22 press ups in 22 days’ to raise awareness of the illness. As the applause started however, Maidstone created their first real chance. Sweeney’s ball down the right, met by Greenhalgh with a backheel just wide. Shots, almost distracted into conceding. 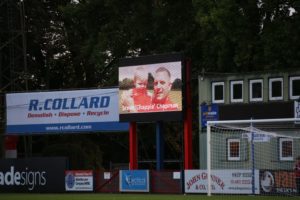 3 minutes later however, Jake Gallagher was in but Worgan was out well again to smother. Iffy Allen’s follow up was parried away. Shortly after, former Woking striker Scott Rendell’s back heel flick to McClure came off, but Matt’s curled shot was saved well by Worgan.

With half an hour played, a neat move in the middle of the park saw Liam Bellamy, (arrived in the summer from Dover) in acres of space. Urged by the crowd to shoot, he took aim, but his shot was blocked and spun wide. Gary Waddock then proclaimed, ‘don’t shoot’ from the sidelines… to ironic cheers. Cheye Alexander and Fenelon then combined well to cross in. McClure’s back heel flick across goal though was scrambled away.

With just over 5 minutes until the break pesky Maidstone attacker Tom Murphy, who like Bellamy at Aldershot, arrived from Dover Athletic in the summer, found himself in one on one with former Cards keeper Jake Cole on the right of the box. This time however, it was the Shots keeper’s turn to come out and smother the chance.

Shots almost contrived to concede in first half added time, as a Maidstone left wing cross saw hesitant defending from the home side. As two shots defenders left it for each other, only a Maidstone player sprinting in to make an effort saw Shots take command, turn, and clear the ball away.

Shots though, entered the break, slightly aggrieved to be still at level-pegging.

After the restart, Maidstone began the second half, in similar fashion to how Aldershot had started the first. Alex Flisher was immediately down the right and whipped in a pinpoint cross to Levin Lokko. But the header down was well dealt with by Jake Cole in goal.

After a lengthy stoppage to treat injured Stones defender Callum Driver (who was then subbed for attacker Dumebi Dumaka), the game was back up and running with a bang with chances at either end. First Alexander’s cross from his own throw reached Allen, but he could only slice his shot wide. Shots captain Matt Reynolds was then nearly cursing his over confidence, as his attempted midfield dribble, lead to him being dispossessed. Alex Flisher was set straight up by Anthony Acheampong but shot straight over the goal.

With the first change of the night, Allen was then replaced by another flair winger in the shape of Bernard Mensah. His impact was immediate as his cross flew just over the head of Matt McClure who was poised to pounce. Finally dropping for Fenelon, the resultant half-volley was blocked and cleared.

On 66 minutes, Matt McClure got involved once again with a snapshot from 25 yards. However a deflection ballooned the ball up in the air and it fell straight at Worgan in goal.

Earlier introduction Dumebi Dumaka who had already been more of a pest for the visitors up front, then created what could have been the opener. Setting his strike partner Tom Murphy away down the right, another incredibly accurate cross found its way back to Dumaka who could only toe poke it towards goal. Despite a lack of power, Cole had to stretch to palm it away.

It was then we saw the first great teamplay move of the match, fortunately, for the home side. Fenelon and McClure probed an opening on the edge of the box before playing it left to Gallagher inside the area. His cross-shot was well turned behind by Worgan.

With less than 10 minutes to go, new-contract man Cheye Alexander decided to remind the home faithful he can do more than just attack, as he slid in to prevent Dan Sweeney entering the box after HT sub Jack Paxman had played him in.

85 minutes had elapsed before we saw the first bad challenge of the game, Tom Mills late tackle on Fenelon who looked to be in on goal. A yellow card was shown and the resultant free-kick cleared by  the visitors.

As many of the home faithful resigned themselves to what looked like would be an unlucky goalless draw, finally, the 1st and only goal of the night arrived. Maidstone got themselves in trouble on the edge of their own box and the loose ball was played forward by Mensah into McClure. As the ball was played back to him, Stone’s Bobby Joe-Taylor (covering at right back since Callum Driver’s departure) slipped, allowing Bernard in. He shoots high to the left of goal. Keeper Worgan getting a hand to it, but only contriving to push it into the top corner….1-0 Shots!

In between 2 added time Shots subs, one being Will Evans for Rendell, Shamir Fenelon showed that firstly, the result was not yet guaranteed, and secondly, that he could also defend himself, getting back to make a vital tackle inside the left of the shots box. Maidstone were in for an equalizer.

Kellerman then replaced Fenelon and the whistle blew on a truly memorable finish to Aldershot’s first home game of the season!