KEITH HILLS accepted that individual errors cost his side during Knaphill’s 3-0 defeat at Hartley Wintney in the Aldershot Senior Cup on Tuesday evening – but has issued his trust in his players. Dean Stow and Sam Argent scored in the opening six minutes to put the hosts in control, before Ross Cook added a third in the 53rd minute to seal Hartley’s progression to the semi-finals.

Immediately after the game, Knaphill boss Hill was frustrated with his side’s mistakes but remains confident the Knappers can turn around their form after three consecutive losses.

He told Radio Woking Sport: “We came here with a game plan but it only takes one or two mistakes for us to slip up and they are a team that will punish you, they do that week in, week out.

“We made mistakes and we’ve been making mistakes. I’m disappointed with them but unfortunately at this level you are going to make mistakes.

“I believe in every one of my players, the results aren’t going our way. they’re disappointed and as long as I see that with the mistakes they are making then I know we can rectify that.”

Hartley Wintney are currently top of the Combined Counties Premier League, 23 points clear of the nearest challenger Hanworth Villa, who do have a game in hand. 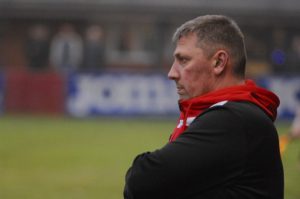 VIEW FROM THE HILLS – Knaphill manager Keith Hills searches for the positives. [Photo by the Woking News & Mail]

Hills was complimentary of the opposition, and believes that his players can only benefit from playing an opposition with the standard of Hartley Wintney.

“We’re playing against top of the league, they are a great team. They are in essence a Ryman Division side, they’re established, they’ve only lost two games all season and to play against a team like that it doesn’t do us any harm.”

The Knaphill boss made four changes from the side that lost to CB Hounslow United on Saturday with Richard Shelley, Connor Close, Jimmy Norman and Eddie McKinlay dropping out of the side.

Alex Harris, Josh Watkins, Chris Patterson and U18s midfielder Ethan Losty came into the starting line-up, but there were notable absences with Hills was quick to highlight.

He said: “We’ve lost some big impact players. We’ve missed George Frith massively, he’s a fantastic player and you can see why he used to play for Woking.

“Danny Taylor has got issues and he’s decided to go and play with his mates because he’s simply not happy in football in general. When you lose that calibre of players with that skill it can make a difference to the squad.”

Knaphill are currently 8th in the Combined Counties Premier League, and face their biggest game of the season on Tuesday when they travel to National League neighbours Woking.

Despite the occasion, Hills believes the focus is purely on a game at a time, and has labelled every game as significantly important in Knaphill’s season.

“Every game is important to us because we’re trying to get our fluency back and we will still put a strong side out.

“We weren’t focusing on the Woking game when we came here, and we’re focusing on each game as it comes to us. That’s my approach to the games anyway.

“We’ll lift the players back up again, get their heads back up as we’re going through a lull at the moment. Sometimes it’s not a bad thing coming of a loss going into a big game but every game should be a cup final.”

Knaphill will face Woking in the Surrey Senior Cup quarter-final on Tuesday evening, with kick-off at the Laithwaite’s Community Stadium at 7:45pm.

Mark Francis and Edward Stokes will be providing live commentary to the game on DAB digital radio and online at www.radiowoking.co.uk/listen.