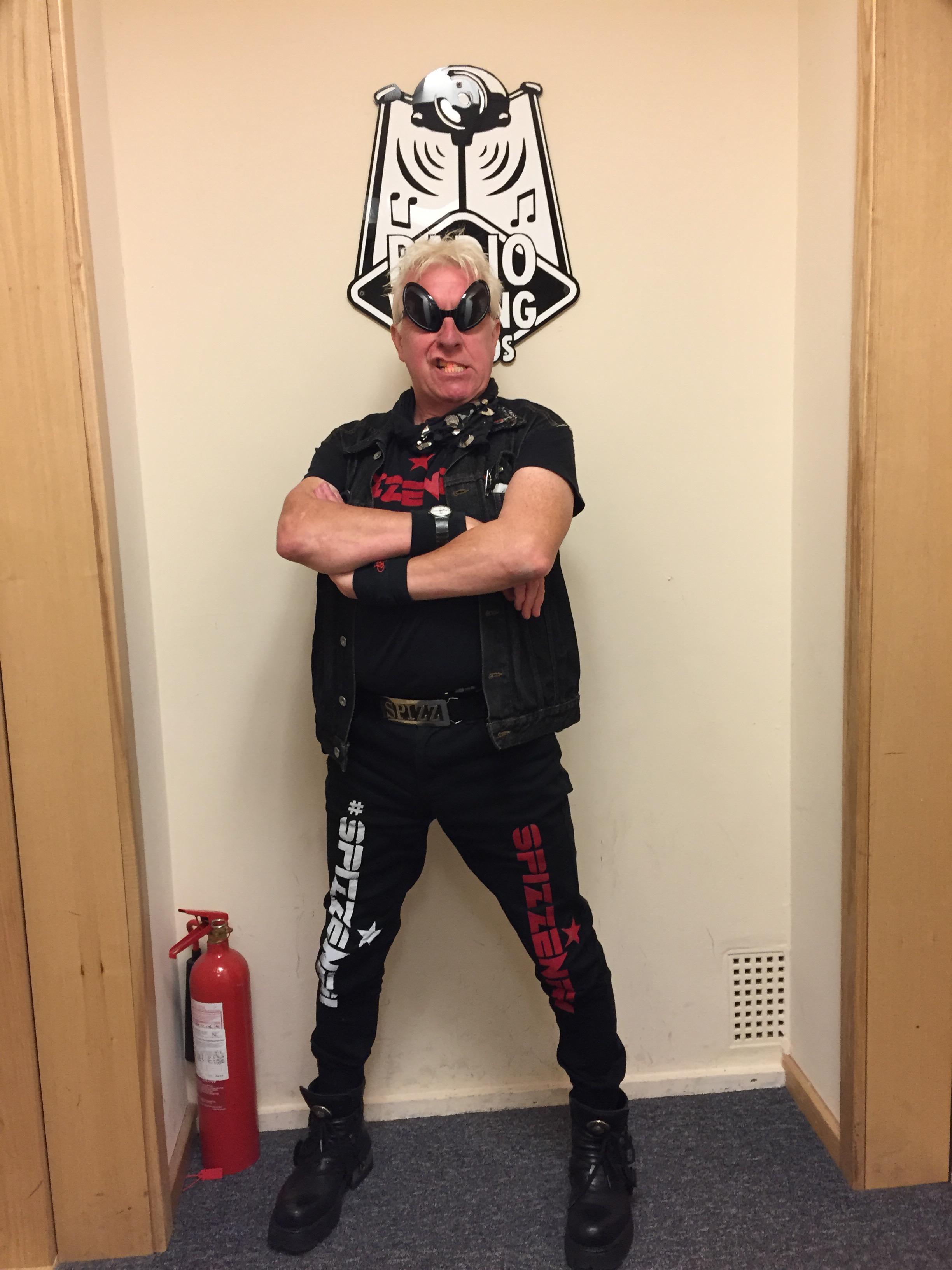 Woking. 5.30pm a Thursday in August: Spizzenergi has been loose in the town unaccompanied for approximately 45 minutes. I rush to Jubilee Square (named for the monarch not the film with Toyah in it) to collect my charge and find him in full Spizz regalia the like of which has never been seen before in Woking. He’s eschewing admiration of the Sean Henry sculptures holding aloft a tray of ring donuts with specific ring size that can accommodate a can of Stella (someone’s missing out on an innovative brand partnership). People here are getting used to this street culture these days and no one pokes his ring donut. I wrangle him to O’Neills where like an ex-pat who refuses the richness of local fare he orders a pint of Camden Hells from the comfort of a table far from the till – come on Londoners – throw off your shackles we have our own brews down here, some have no twigs or knuckledusters in them and, two hours before the show starts, the show starts. By the time we get to the radio station I have Spizzenergi, Terry Thomas and Tommy Cooper all in the same seat in my Peugeot 207.
From jumping on the stage in 1977 at his local venue Barbarellas to the heady heights of John Peel sessions – standing on a beer crate at a pub in Birmingham to Hammersmith Odeon within a year – as he said ‘that just doesn’t happen now’. There was no Hughie Green involved in the making of Spizz; entirely self made and promoted – different versions of the Spizz over the years which, despite best efforts, didn’t get into the Guinness Book of Records for artist with the most name changes(by then Prince had cornered the symbol market). He has remained a performer as well as musician and artist who is well known for his affable demeanour, energetic compelling stage presence but whose impetus to communicate through music is inspired by a deeper more thoughtful desire to make sense of what is happening in society and a kindness in delivering it.

His live shows are as entertaining and powerful today and he is currently gigging extensively, the next being 2nd Sept at London’s Vinyl Bar for Blackstar Promotions with The Wall, Snide, Phoenix Chroi & Russ Crimewave and further gigs with record label mates from Flicknife including the excellent Morgellons & Blue Carpet Band and importantly a Punks Against Homelessness gig raising money for charity in October. Look out for his gigs on social media and listen again to the show here – it was an absolute shower! I say!

When the Tea Runs Out – Russ Crimewave

Don’t Want You Back – Snide

Ride With Me – Phoenix Chroi

When the Tea Runs Out – Russ Crimewave reprise

Top of The Pops – The Rezillos