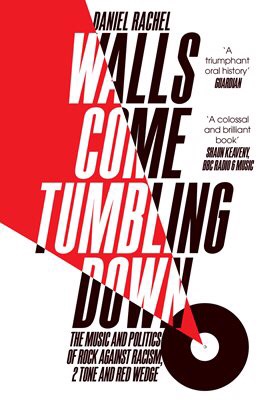 Thursday 25 May – The Fiery Bird Show continues to bring you interesting guests from a diverse arena of  creative outputs welcoming Daniel Rachel author of the award winning ‘WALLS COME TUMBLING DOWN -The Music & Politics of Rock Against Racism, 2Tone and Red Wedge’  to talk about the book, the times that kick started the movements and the legacy we have today.  “A book of in depth conversations with over one hundred contributors – including Pauline Black, Billy Bragg, Jerry Dammers, Phil Jupitus, Neil Kinnock,  Linton Kwesi Johnson, Claire Short, Tom Robinson, Tracey Thorn and many more – Walls Come Tumbling Down is a fascinating, polyphonic and authoritative account, fully illustrated with many rare or previously unpublished images from some of the great music photographers”

His first book ‘ISLE of NOISES‘ received high acclaim and ‘features brand-new, exclusive, in-depth conversations with twenty-seven of the UK’s greatest living musicians. Artists discuss their individual approach to writing, the inspiration behind their most successful songs, and the techniques and methods they have independently developed. It is an incredible musical journey spanning fifty years, from ‘Waterloo Sunset’ by Ray Davies to ‘The Beast’ by Laura Marling, with many lyrical and melodic secrets revealed along the way.’

Having chatted with Daniel about his work, I’m really looking forward to hearing more from him and having him join me in playing some of his song choices, hearing more about his own music and his approach to writing