8-9pm We’re joined by local Voice Over artist Lorraine Ansell. We met her last year when she was involved with Wells in Woking, and tonight we’ll be talking about what she does, and all that’s involved in her work.  She has also chosen 3 songs and we’ll be hearing these in between our chat.

Plus there’s a big shout to The National Citizen Service!

I’ll be talking about meeting the awesome Team Sabesan, and we may even have a phone in from NCS Challenge, who cover our area.
(I’m on it this morning 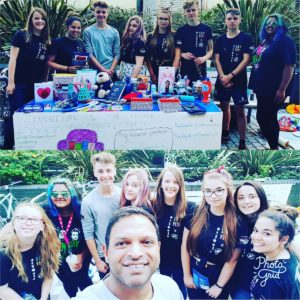 Jackie Witney will be Missing in Action for most of the show…..she’s on a Mission!

Last week’s guest Riette Thomas spoke about Woking Food Festival, and a talk she mentioned. It’s on this evening at WWF Living Planet Centre from @shedotspace – ‘Eat Yourself Smart’.

So Jackie will be there, then rush back to tell us all about it before the end of the show.

So for 2 hours of fun local chat, events and some cool music,

Join Timothy Buckler , myself and Jackie Witney from 8-10pm on Radio Woking!