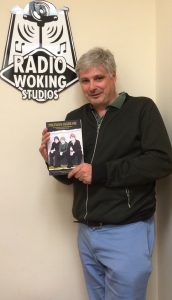 Joined by Paolo Sedazzari author of Feltham Made Me, an oral history of three great friends who come together at Feltham secondary school, growing up and the life situations they found themselves in, supporting each other even if disgusted; a kind of chopper and flares In Betweeners..before punk exploded and into the Acid House years and beyond.

I read the book in about two sittings, drawn in as I was by the locations and the backdrop of a life and adolescence recognisable to me – how life was led in the 70’s & 80’s, an undercurrent of menace accompanying the choices we made on where to socialise, what to wear and how much we could get away with without our parents knowing, and for God’s sake – Delamare jeans! I remember the dawning horror of the outfit my lovely Mum bought me for a school disco as it came out of the Finefare bag.

For a local radio show it was great to be able to talk about places, we all have them, that are imprinted on your youthful brain to slap you in the face with the same smells, atmosphere and hope that you felt then. To remind you, as you now perambulate yourself around the streets of areas you might take for granted as an adult that were unattainable, scary and unimaginable, that there were parts of your own postcodes that were enigmas; where the older, more sorted kids gathered, made plans and headed off to the smoke that you now don’t think twice about travelling to after a life of visits from the pedestrian to the sublime.

Woking, Hersham, Feltham, Southhampton, The Jam, The Smiths and Septimus Grundy – the contenders who never contended, the band named after his abandoned grave, I wonder how he would have felt to know he lent his name to a trio of testosterone fighting for their corner with no gloves on.

I’d recommend this as a read and check out Paolo’s other work, some interesting film pieces one of which, Rocking Chair featuring a very young Chris Simmons (The Bill/All or Nothing) inspired this novel. It goes to show that a good idea can be kept and grown only to make itself a story. It feels that from reading the book and seeing the short film that somewhere this is a story that lived itself into existence, the fourth companion, the last gift that a character Carl gives back, to shine on lives that are worth documenting and celebrating, ordinary lives.