Merstham FC were crowned Champions of the 2016 Surrey Senior Cup after a 4-1 victory over Godalming Town at the Laithwaite Community Stadium on Wednesday evening.

Simon Cooper, Tom Kavanagh, Charlie Penny and Aaron Hopkinson were on target for the Ryman Premier League side, who asserted their dominance when going 4-0 ahead.

Piers Oldland scored a late consolation for Godalming, but it was a case of too little too late as Merstham ended a successful season with silverware.

Merstham started the game on the front foot and showed why they were the higher ranked side when they opened the scoring in the seventh minute.

Fabio Saraiva found Penny on the right-wing, and the striker pulled it back for captain Cooper to slot home his fourth goal of the season.

Five minutes later, Penny was again involved as Merstham doubled their lead. The striker picked out midfielder Kavanagh to fire home his seventh of the season from close-range.

After a frantic start, Godalming started to adapt to the pace and intensity of the side playing in a league above them.

Firstly, Will Hutton’s low drive was saved by the out-stretched arms of Josh Smith before Louis Hutton fired over from 20 yards out.

However, just as Andy Hunt’s side started to create chances, Merstham extended their lead in the 35th minute.

Fabio Saraiva played a ball behind the Godalming defence for striker Penny to run onto and fire the ball into the bottom corner for his 23rd goal of the season and put Merstham confortably in control at half-time.

Godalming brought on Rory Sellick in the hope that they can find a way back into the game, and within two minutes of the restart captain Graeme Purdy fired wide.

Godalming’s offensive dominance was brief, as Kristian Campbell and Penny both went close for Merstham, with Godalming goalkeeper Oneal Garnes denying them. 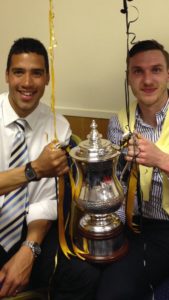 Merstham’s inevitable fourth goal of the game came in the 62nd minute, when a flowing one-touch passing move resulted in Cooper crossing it for Hopkinson to tap home in front of 560 supporters at Woking.

Godalming brought on Danny Bassett, and the striker immediately made an impact up front for the hosts. In the 80th minute, he played in Louis Hutton and his shot from inside the area was smothered by former Brighton schoolboy Smith.

Bassett then fired over five minutes later as his influence started to change the game in Godalming’s favour, and they started to be on top.

In the 90th minute, they made their pressure count as Bassett set up Oldland to score a brief consolation, but it was too late as Merstham went one better than last season, where they were beaten finalists.

After a successful season for Hayden Bird’s side which started with a 4-1 victory, it was only appropriate that Merstham ended their campaign on the same note, as they set their sights on another good year next season.